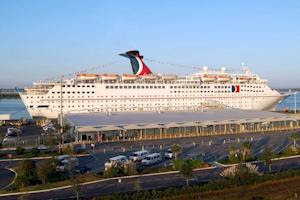 Six different cruise ships, five of them from the Carnival line, have called JaxPort home since service began October 2003. JaxPort welcomed its one millionth passenger in 2011, its 2 millionth in 2016. Have you ever been one?

I had, once, but it has been a long time since 2004. Deciding it was past time to do it again, I and a friend arrived at JaxPort Feb. 15 for a four-day cruise to Freeport and Nassau aboard Carnival Elation.

Sea fog had delayed the ship's arrival and debarkation, which played havoc with check-in schedules, delaying our embarkation by over an hour.  Waiting in Disney-like lines is no fun, but there would be a much longer ride at the end.No way to tell, but our arrival would be delayed by sea fog, too. 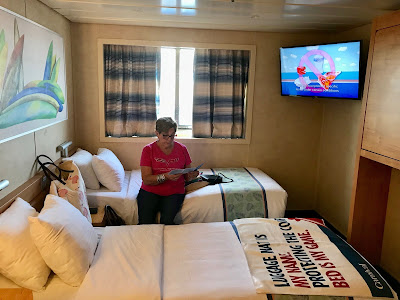 Alexander, our smiling steward, welcomed us to the mid-ship outside cabin with window; balconies are limited on ships that can squeeze under the Dames Point bridge. The average size, inner or outer, is 185 square feet. Storage was ample, bedding was comfy and reading lights were good. Bathroom was small with no amenities beside soap, body gel and shampoo. There was a stool under the desk and a third bed in the wall. 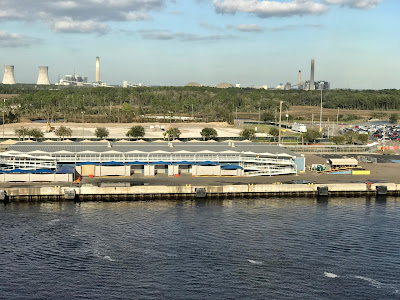 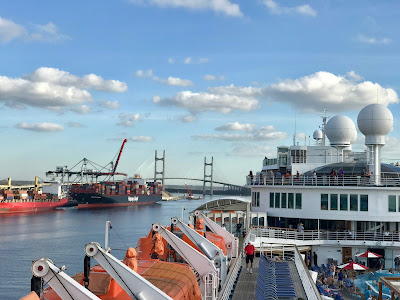 passing by the shipyards, 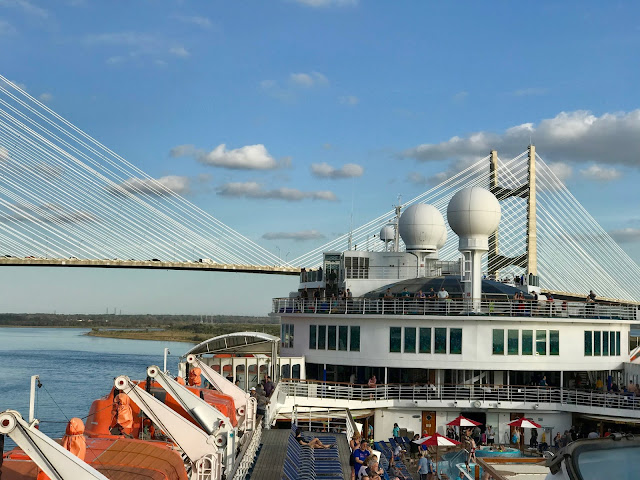 easing under the Dames Point bridge, 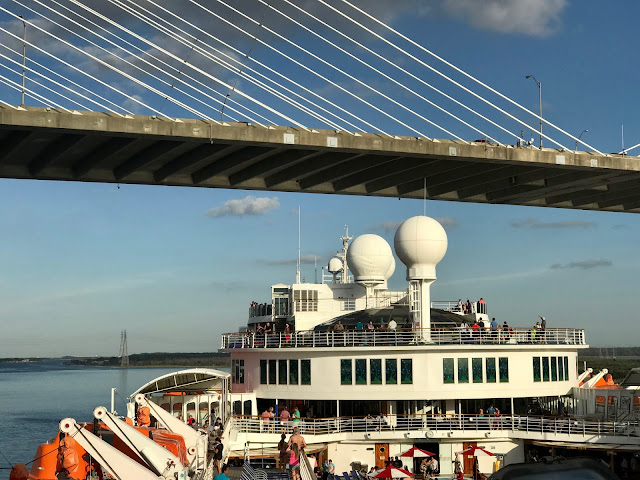 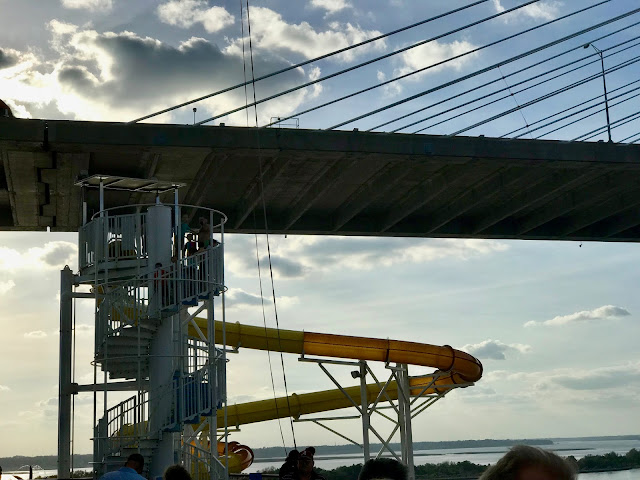 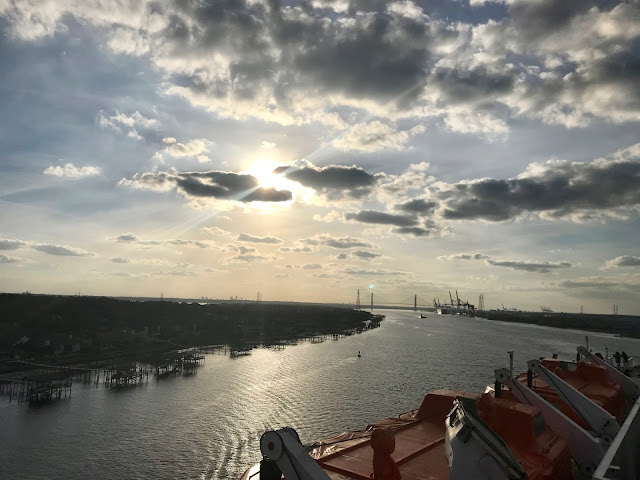 seeing Nassau sound and finally, the jetties and out to sea, where small waves provided smooth sailing throughout our cruise.

When our bags arrived, we unpacked, dressed for dinner and began exploring the ship. There is no dress code, but after lounging and touring in the sun, it always felt good to shower and dress up a bit. 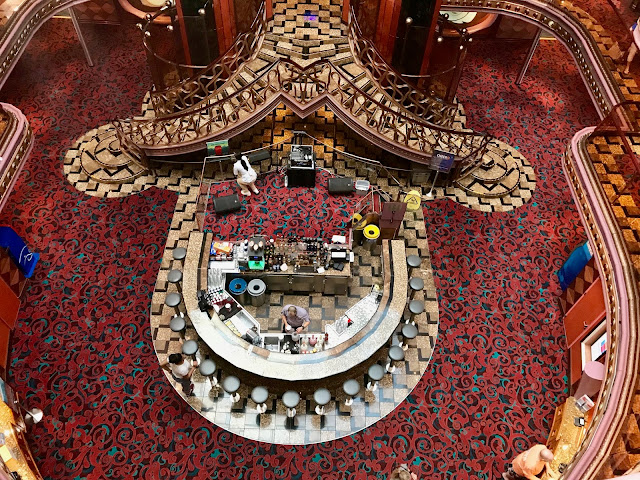 Carnival has muted its once over-the-top garish decor but it still exudes a glittery aura. 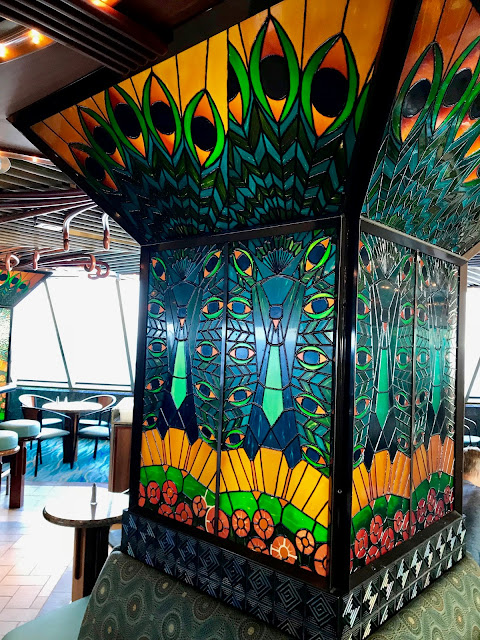 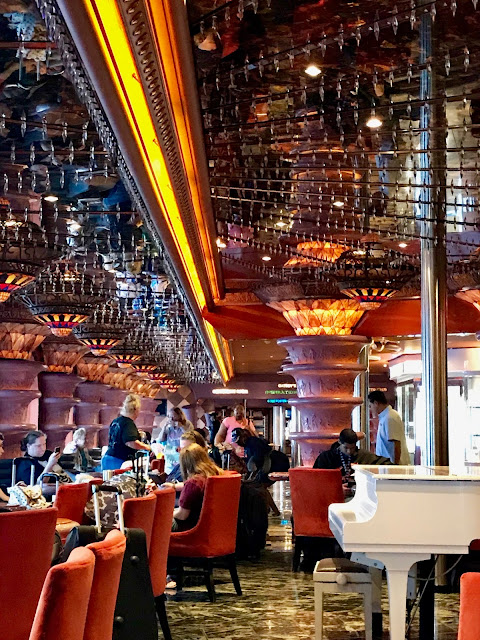 We were assigned dinners at Imagination - its twin, Inspiration, is at the other end of the ship. 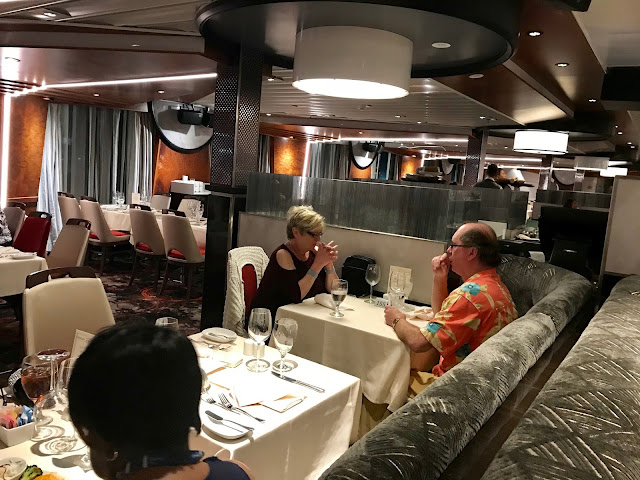 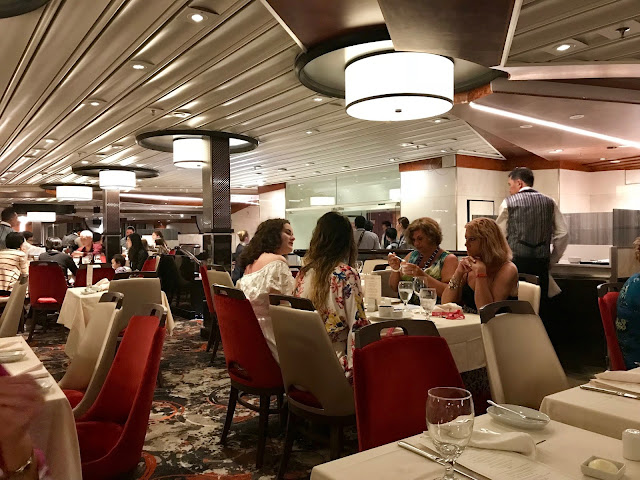 Menus are the same. Wine by the glass is $8-12, by the bottle $30 and up. Menus offer six or so starters, entrees (including a vegetarian choice) and desserts, plus several offerings always available from the grill. Our service team of four were personable and efficient. 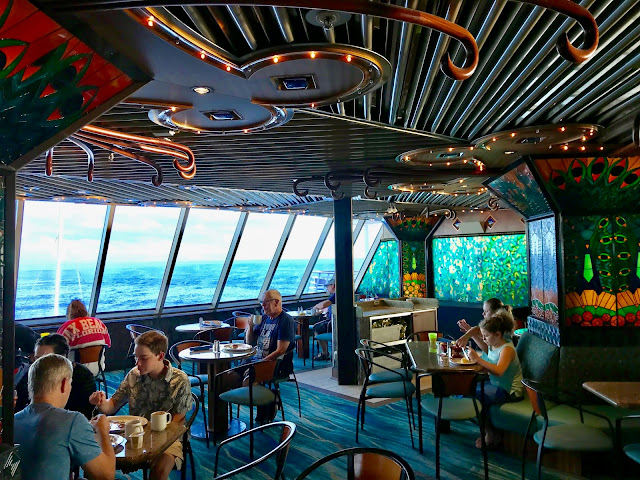 Food was good but not always as warm as one would like. We preferred it here to the buffet at Tifany's, although the salad and omelet bars, good hot coffee and self-serve soft ice cream kept us revisiting.

It is remarkable how relaxing a cruise can be when you've already seen the ports. An hour cruising the shops at Freeport,

a morning walking the streets and shops of Nassau with a purchase each was enough ashore.

In between, we breakfast with omelet and fruit; grab cards, books and towels and select a table on the Lido deck near the Red Frog Rum Bar. After finishing a game of canasta and people watching, it was Bloody Mary time; Latoya makes a great one. Another game or a few chapters of our books and it was lunchtime. Salads from Tifany's, burgers from Guy's Burger Joint or burritos from Blue Iguana and it was more of the same or back to the cabin for more reading and naps (we are both so busy with work and volunteering at home, sleep deprivation is the norm).

Carnival allows passengers to bring a fifth of sealed liquor and a six pack of soft drinks in their carry-ons, so budget conscious us had martinis in our cabin as we talked over the day and dressed for dinner. 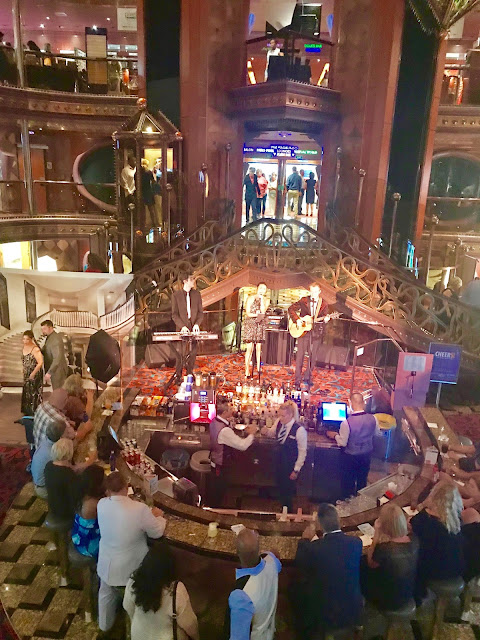 At night we enjoyed the two comics - NOT for children or profanity phobes - cruised the photo arrays and shops, 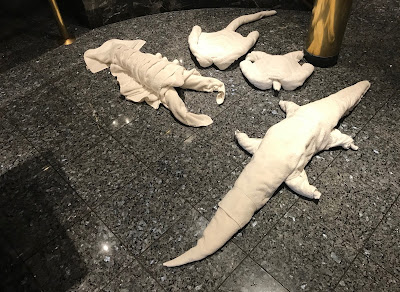 chatted with other passengers, listened to the groups playing in the Atrium and other spots, hit the casino for a few rounds - or as long as our personal limit lasted - and even played Bingo one night. Warning to blackjack fans: Dealers use a continuous shuffle box so there's no way to gauge the likelihood of high or low cards.

With ocean view cabins going for $264-$309 per person, it's a great deal. Even better deals can be had if your travel agent books a lot of Carnival cruises.

Would I do it again? You bet. I plan to when Ecstasy home ports in Jacksonville this fall.

Grand Prize is a four-night stay at either Comfort Suites Seven Mile Beach in Grand Cayman or Comfort Suites Paradise Island in the Bahamas plus round-trip air for two, ground transportation and spending money. 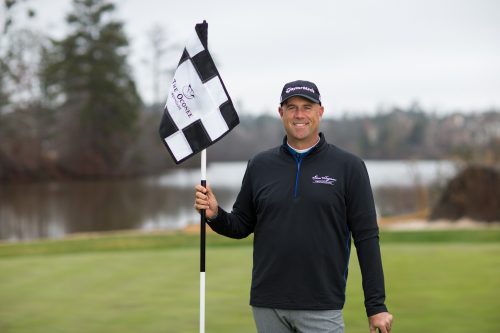 Win a Round with Stewart Cink
Plus a dream golf package at Reynolds Lake Oconee in Greensboro, GA.

Winner of the "Reynolds 360 with Stewart Cink" receives a total golf immersion for two including
• 5 days, 4 nights (April 7-11) at The Ritz Carlton Reynolds Lake Oconee.
• Domestic round-trip coach airfare.
• Ground transportation to and from Atlanta Hartsfield Jackson Airport and Reynolds Lake Oconee.
• Meet and greet with Stewart Cink on the Oconee course.
• Full club fitting at the Reynolds Kingdom of Golf presented by TaylorMade with a new set of golf clubs and select accessories.
• Peter Millar wardrobe for winner including shirts, shorts, pants and shoes.
• A cross section of dining experiences each night of stay.
• "Sporting Clays Adventure" at Sandy Creek Sporting Grounds.
• Two spa treatments at The Spa at the Ritz Carlton.