Most cruise bookings are determined by itinerary, dates and cost. Itineraries change only under extraordinary circumstances.

The unexpected is ordinary on an expedition cruise.


Expedition cruises go into areas of the world where exceptional is the norm. Crews do their best to stick to the advertised itinerary, but environmental conditions may make it impossible.

Especially on the first voyage of the season like the one I recently took to Western Greenland aboard Poseidon Expedition's M/V Sea Spirit.

Greenland caught my attention in part because it is the world's largest island, three times the size of France with a coastline longer that the earth's circumference yet only 56,000 people live there (56,001 if you count Santa Claus at the North Pole). It is also the Mother of Icebergs. One glacier we expected to visit calves 20 billion (!) tons of them a year.

After a fascinating visit to Bear Island in the Nuuk Fjord, an abandoned fishing settlement where small icebergs, bergy bits and growlers were arrayed like nature's sculpture garden, our expedition team leader announced the afternoon excursion had been cancelled; the captain was heading out to sea.

Note: Bergy bit in height is greater than three feet but less than 16 feet above sea level; area is normally about 1,076-3,229 square feet.
Growlers are smaller, about the size of a grand piano or a truck.

An iceberg's height must be greater than 16 feet above sea level, the thickness must be  98-164 feet and the ice must cover an area of at least 5,382 square feet.

Winter had been exceptionally harsh and sea ice, frozen salt water, was still too thick to navigate safely. This set the pattern that would be repeated throughout the cruise.

We visited a number of towns and settlements, snapped numerous photos of brightly colored houses and buildings against snow patched hills and interacted with their Inuit residents.
We ventured out in zodiacs to get close up looks at massive icebergs and glaciers.

We crossed the Arctic Circle several times and were initiated. 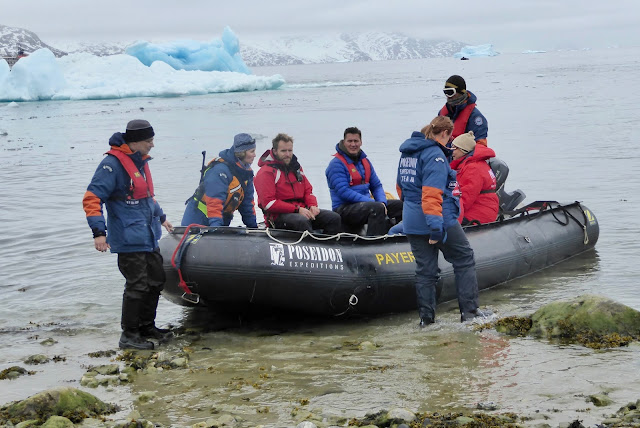 We were in awe of the young expedition team members who scrambled to find alternative landing sites and entertainingly educated us on Greenland, its language, people, explorers, flora, fauna and environment.

The chefs prepared wonderful food, waitstaff made sure we enjoyed each meal, stewards kept our cabins tidy, the ship provided attractive, comfortable quarters and public spaces and Greenland itself filled our memory cards with photogenic scenery.

We did not make it to that prolific glacier or very far into Disko Bay with its proliferation of wildlife. 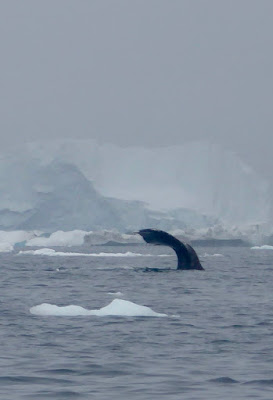 We did, however, see huge bowhead whales that grow to 65 feet in length and weigh in at 100 tons compared to the humpback's 40 tons.

We were serenaded by the Nuuk Choir.

We saw snow-covered mountains when the clouds lifted. 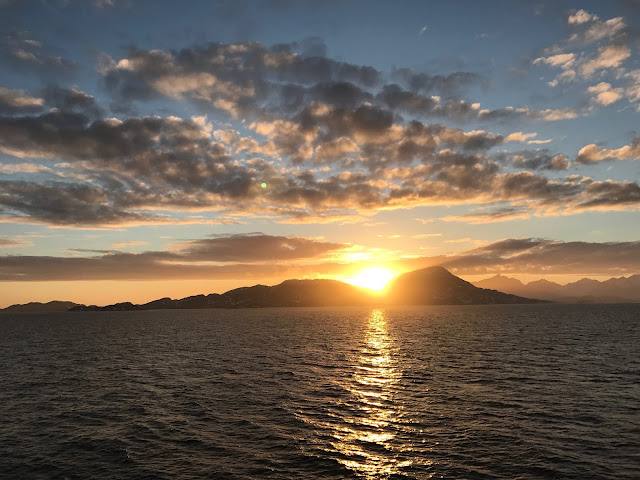 We experienced the midnight sun and days where there was little change in light from morning to morning.

We experienced a few firsts like landing on coasts no tourist had ever visited.

Most exciting of all, when we couldn't get the ship up a fjord, having our luggage air-lifted in a sling to the airport and taking zodiacs to an abandoned spot where a Sikorsky helicopter could land and give us a 25-minute ride there, too.

In Poseidon's 18 years of polar expeditions in the Arctic and Antarctic, including an atomic-powered ice breaker to the North Pole, it had never happened to them either. 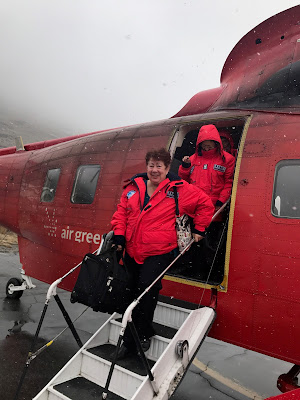 Now that's a story to bring home with that bright red polar parka with almost as many patches as a NASCAR driver.

It's also the sign of a well-run cruise operation that knows its territory and has an excellent relationship with local sources.

Expedition cruises aren't cheap - $6,000 and above per person double occupancy, for eight days in Western Greenland - but given the uncertainty of itineraries, the first cruise of the season is often discounted, especially as departure nears. There is usually an upcharge to kayak because of added staff and specialized equipment.

Sea Spirit has 114 en suite cabins and combines the re-enforced hull and equipment of an expedition ship with the ambiance of a boutique cruise ship. You borrow the water proof rubber boots but with Poseidon you get to take the polar parka home. 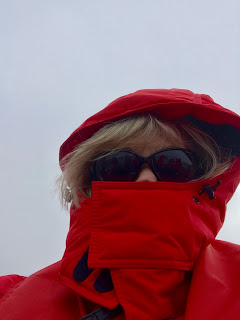 Reminder: It's cold at the ends of the Earth. 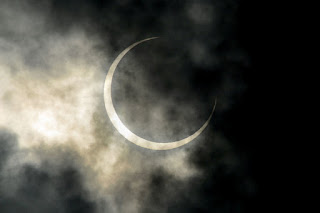 If you haven't selected your eclipse viewing spot yet, or if you have and don't know if you should drive closer to the path of totality, this from Bravo Jet Set

might help. Thanks to Escape to Blue Ridge for passing it along to me.

The closer you are to the zone of totality the longer and the clearer its effects.

For example, in Blue Ridge, plan to catch the eclipse in totality at 2:35 p.m. for 35 seconds. The town is on the southern edge of the shadow, so totality only lasts for 35 seconds.

Count on Blue Ridge and everywhere else along the path to have specials from sun-inspired food to sets of viewing glasses at accommodations.